You are here: Home / Latest News / At Bucha in Ukraine … there were also Miracles! 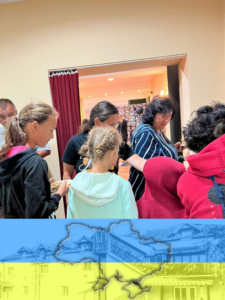 This is what Galina told us, a lady from Bucha who was our guest last month, together with 34 other people – the vast majority of whom were children, most of them adopted. Galina became a widow a few years back and lived in Bucha with her 4 natural children, 5 grandchildren, and 6 adopted children.

She showed us a picture of her house, a very beautiful and spacious house, her life’s work, the place where she felt at peace with her extended family and a lot of guests that she often hosted there. Then he showed us a set of pictures of her house destroyed by bombs and shells. Through tears she told us: “… here was the kitchen, there was a big hall, but now everything is in ruins!”

The night the Russians attacked Bucha, Galina together with 150 people, Christians and non-Christians, took shelter in the church. They experienced moments of horror. The lights of shells and projectiles could be seen from the windows of the church and explosions could be heard all around. On that cold March night, all the unbelievers who were there surrendered their lives to Christ. They all admitted that they experienced a miracle that only a LIVING and TRUE GOD could do: the church building remained untouched… in an area where everything around was destroyed.